Day 1 of the 2013 Vineyard National Conference

This evening was the start of the Vineyard National Conference. As with my previous Vineyard conference experiences, I figured I’d post some random thoughts based on my experience. For the three of you who both attend the church I pastor and read this blog, this will be of interest. For everyone else, this will simply give you a snap shot into the movement I personally call “home.”

But that’s not the “bang” I’m talking about. Right out the gate there seemed to be a very strong corporate longing for the presence of God. Casey Corum and team led the music and it was awesome. I’m a ginormous fan of the song “Show Your Power,” so I was hook, line, and sinker pretty much right away. Joining thousands of other voices to ask the Lord to show his power and acknowledging that the gospel is the hope of our nations was incredible. It’s foundational to the Vineyard to be thinking along the lines of the kingdom of God, his rule and reign, coming in power. The music was great. 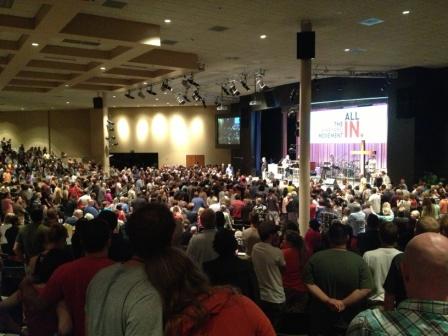 Most of the conferences I attend that are “charismatic” in orientation generally have some music, an announcement or two, the message, and then the infamous “ministry time” where people come forward and receive prayer. Tonight was a little different. Phil Strout, the National Director of the Vineyard, felt led to encourage those who were suffering from serious medical conditions to receive prayer while the rest of us continued to sing praise and worship. A large group of people came forward to receive prayer and a large group of people followed them to pray for them. This is why I love the Vineyard. The theology of the kingdom of God has practical and immediate application. Yes, the kingdom of God is not consummated at this time in redemptive history, but the kingdom of God has been inaugurated in the life and ministry of Jesus and we continue his ministry through the presence of the Spirit. This time of prayer was the practical outworking of our theology.

While people received prayer, the rest of us continued singing. Did I mention I also love Matt Redman’s “10,000 Reasons (Bless the Lord)”?

The music was incredibly good tonight. Yet it wasn’t just the quality. That was secondary. There was just a strong desire to exalt God in our singing.

The message tonight was given by Strout. He essentially kind of opened the conference up with sketching out the big idea, which was that “All In” is about how the Vineyard Movement is an “all ages” muti-generational movement. It’s got thousands of kids, teens, young adults, middle-agers, and “seasoned” (old!!!) people.

This is something I’ve noticed too. When I was growing up in the Vineyard churches we attended (primarily Smoky Hill Vineyard), it seemed like a lot of young adults. Yet I had the chance to attend the Anaheim Vineyard this past Sunday and noticed a lot of middle-aged and “seasoned” people there. Frankly, the Vineyard Movement has grown up… and we’re the better for it, I think.

At any rate, the message was excellent and I was inspired and equally challenged. Here are a couple of the take away statements that Strout gave:

“Where are the future leaders of the Vineyard? Look in the nurseries of your churches!”

“If the gospel you are calling people to isn’t worth everything, it isn’t worth anything.”

Strout’s message wasn’t only about the fact that the kingdom of God is an all ages type of thing, but that it’s totally worth giving up everything because it’s worth everything. So the “All In” concept was working in multiple ways.

After the message was finished, there was a powerful time of prayer and ministry for those who had needs and those who didn’t.

I’ll try and do a recap at the end of every day this week… but I would also encourage you to check out the Live video feed here too. You can watch all the sessions from your home!