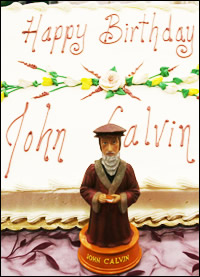 One cannot hold to Reformed Theology (Calvinism) without having heard someone say, “Calvin was a murderer who had Servetus burned at the stake!” It’s a common objection to the theological views known as Calvinism.

For years, I was under the impression that John Calvin was directly responsible for the death of the heretic known as Servetus. The image that was painted before me was that Calvin, the mean-spirited Reformer, jumped at the opportunity to burn someone who was teaching heresy. However, there are significant problems with this over-simplification… namely that it is 100% incorrect.

Since today is John Calvin’s birthday (he’s 504 years old), I wanted to direct you readers to a short essay that you might find helpful in thinking through Calvin’s involvement with Servetus. It is but a short introduction to the subject, but makes some very important “discoveries” that need to become familiar to those who use this “objection.” Say what you may about Calvinistic theology, but leave Servetus out of your arguments!

Thus, I commend to you a short appendix written by Mark R. Talbot called “A Note on Calvin & Servetus” in With Calvin in the Theater of God (download the free book here). Much of what Talbot writes I encountered in a seminary class on the life of Calvin, so this isn’t something unique to his understanding the past either. Here’s a helpful quote that essentially summarizes Talbot’s short chapter:

For some reason, many people seem to think that we should only follow the teachings of theologians that are perfect. There’s a vast difference between studying the influences upon a theologian so that we may better understand their thinking and studying the lives of theologians from the past so that we can discredit all that they say and do, simply because they were… *gasp*… sinners. Talbot quotes Alister McGrath’s Life of John Calvin on this issue:

“Sadly, every major Christian body which traces its history back to the sixteenth century has blood liberally scattered over its credentials. Roman Catholic, Lutheran, Reformed and Anglican: all have condemned and executed their Servetuses. . . . It is fair to suggest that it is improper to single out Calvin as if he were somehow the initiator of this vicious trend, or a particularly vigorous and detestable supporter of the practice, where the majority of his enlightened contemporaries wished it to be abolished.” (p.120)

Servetus shouldn’t have been killed. But it’s unhistorical to suggest that Calvin killed him. Plus, when you find out that Calvin had actually had a lot of pastoral interaction with Servetus, it sure frames the issue much more!