“Do Historical Matters Matter to Faith?”, ed. by Hoffmeier & Magary 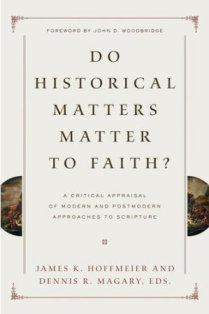 There are a lot of books that seek to expose problems in the Bible and many others that seek to defend its truthfulness. My shelves are full of books that address issues related to the historicity and truthfulness of the Bible. But there area lot of people, especially in today’s postmodern culture, who tend to take a rather apathetic approach to these issues. In fact, on more than one occasion I have had friends state that it doesn’t matter much whether or not the events recorded in Scripture actually happened… we just need to take the moral teachings of Jesus and the Bible and see them for what they are.

The natural question, then, is simple: does the history that is presented in the Bible actually matter to the Christian faith? What are we to make of all the current skeptics of the Bible and the advocates for its distrust?

A recent work has taken on this very issue, Do Historical Matters Matter to Faith?, edited by James K. Hoffmeier and Dennis R. Magary. Over twenty scholars contribute well-researched essays that cover a variety of topics, including issues related to Biblical, Systematic, & Historical Theology, the Old & New Testaments, and Biblical Archaeology.

There’s a lot covered here, so where do we begin? Since this is a blog review and not an academic journal, I’ll keep try and cover the essential details that some of my readers will be interested in.

First, I believe the book accomplishes it’s purpose. John D. Woodbridge writes in the foreword that he hopes that “this volume will strengthen the convictions of evangelical Christians who believe that the Bible is the inerrant Word of God (including its historical narratives), but also that it will serve as an attractive invitation to those readers who have dismissed this stance to reconsider their commitment to biblical errancy” (p. 18). As one who holds to “reasonable inerrancy,” I found the essays strengthen my convictions. And as one who interacts with and has friends who would not hold to classic inerrancy, I believe this work is fairly irenic and the invitation to engage exists. Of course, time will tell if those who deny inerrancy will interact with Do Historical Matters Matter to Faith?, but the invitation stands nonetheless.

Second, one of the reasons why this book accomplishes its purpose is because it’s fairly wide in scope. For those familiar with the issue of the historicity of Scripture, the Old Testament presents some significant “problems” that must be carefully researched and interacted with. I found “Part 2: The Old Testament and Issues of History, Authenticity, and Authority” as well as “Part 4: The Old Testament and Archaeology” to both be excellent places to begin when engaging modern (and post-modern) critical scholarship. The sections on the various theological disciplines (biblical, systematic, & historical) as well as the section covering the New Testament were equally good, though I have found that the OT tends to receive a great deal of attention from those who take issue with any sense of “inerrancy.” At least that has been my experience when interacting with people over the years. Questions regarding the truthfulness of what is found in the OT are the most common. Did Exodus really happen? Did the exodus really bring the Hebrews to cross the Red Sea (reed sea??), as the water was divided? Can we really trust the narratives found in Genesis? Over and over again, questions are raised.

Third, the scholars that contribute to Do Historical Matters Matter to Faith? are well selected. Those who write on the theological issues are well suited (e.g., McCall, Cole, Thompson), as well as those in the OT sections (e.g., Averbeck, Bergen, Monson), and the NT (e.g., Yarbrough, Blomberg, Bock, Schnabel, Davis). I was more familiar with the NT authors, as each of them is well known in the NT world, but found each essay representative of the best that evangelicalism has to offer.

Fourth, and this is really connected to the quality of the contributors, the essays are very well researched. It’s safe to say that readers will walk away with a long list of “further reading” sources. Plus, the fact that this book uses footnotes (instead of the hell-inspired end-notes) makes for simpler scholarly reading. The sources and extra information is right there at the bottom.

For me, stand out essays in each section were as follows:

Part 1: Biblical, Systematic, and Historical Theology
Graham A. Cole’s “The Peril of a “Historyless” Systematic Theology.” Every systematician should be required to read this essay. Exegetes who are frustrated with lazy proof-texting will be encouraged to read a theologian emphasizing the importance of taking history seriously. He writes that “this gospel (news) is an interpretation of history. At its core is an interpreted event: Christ died (event) for our sins (interpretation). Systematic Theology done without sufficient sensitivity to this news is full of peril” (p. 68). Excellent.

Part 2: The Old Testament and issues of History, Authenticity, and Authority
For me, a tie exists between Robert B. Chrisholm Jr.’s “Old Testament Source Criticism: Some Methodological Miscues” and Richard L. Schultz’s “Isaiah, Isaiahs, and Current Scholarship.”

Chrisholm effectively counters the various theories related to the Documentary Hypothesis as it’s step-children views as he points out the problematic methods that many source critics follow. According to Chrisholm, where you begin greatly affects (determines?) where you will end up. This is to say that critics who approach Scripture with a strong biases regarding the “source” can easily end up manipulating the text (and its meaning).

Schultz’s essay on the debate regarding the authorship of Isaiah was very informative and helped strengthen my resolve to stand upon a single author perspective. The assumption of so many OT scholars regarding the multiple authors of one of the most quoted OT books in the NT needs to be challenged, and this essay does a great job of doing it. He largely interacts with two scholars, John Halsey Wood and Kenton Sparks, and point by point responds to their criticisms of holding to Isaiah being written by a single author. These two essays will prove to be invaluable resources in the future to come.

Part 3: The New Testament and Issues of History, Authenticity, and Authority
There’s another tie in this section, only this time it’s between three essays. Craig L. Blomberg’s “A Constructive Traditional Response to New Testament Criticism,” Darrell L. Bock’s “Precision and Accuracy: Making Distinctions in the Cultural Context That Give Us Pause in Pitting the Gospels against Each Other,” and Eckhard J. Schnabel’s “Paul, Timothy, and Titus: The Assumption of a Pseudonymous Author and of Pseudonymous Recipients in Light of Literary, Theological, and Historical Evidence” are all first-rate essays that address extremely important issues when it comes to NT studies.

Blomberg’s essay on how to respond to issues related to New Testament criticism is extremely balanced. He concludes by suggesting that those who are on what I’d call the “left side” of the theological spectrum (theological liberals) need not adopt “radical approaches” regarding the New Testament and that those on the “far right” (theological fundamentalists) need not “anathematize” scholars who suggest and explore different options as proposed solutions to NT “problems.” These are good suggestions. One need not jump to “liberal” presuppositions in the quest of understanding some of the issues related to the NT’s history and authenticity. There are a lot of solutions to many of the alleged discrepancies. And yet just because someone suggests something that is a bit “unorthodox” (new!) does not mean we should ostracize that scholar and remove him/her from every evangelical organization he/she is a part of . As Blomberg writes, “If new proposals (or at least proposals that are new for otherwise evangelical scholars) cannot withstand scholarly rigor, then let their refutations proceed at that level, with convincing scholarship, rather than with the kind of censorship that makes one wonder whether those who object have no persuasive reply and so have to resort simply to demonizing and/or silencing voices with which they disagree” (pp. 364-5). Amen!

Bock’s essay on the Gospels is fairly introductory, but should be ready by anyone who is involved in attempting to harmonize the Synoptics or John or for those attempting to better understand the issues related to how they either fit together, compliment each other, or contradict each other. His essay is a good introduction to understanding how the Gospels relate to each other. Beginning with explaining the basic difference between reporting the “voice of Jesus” (ipsissima vox) in contrast to the exact words of Jesus (ipsissima verba), Bock briefly addresses a number of concerns related to the “consistency” between the four Gospels. It’s a good introduction for those with basic questions.

Schnabel takes Pauline pseudonymy up in his essay. A great deal of NT scholars do not believe that the apostle Paul wrote the “Pastoral” epistles (Timothy and Titus). Exposing the assumption that “majority” equates to correctness, Schnabel closes his essay by writing that “as the evidence that has been surveyed demonstrates, there are good reasons to accept the Pauline authorship of these three letters.” Space limitation prevents me from detailing his detailed reasoning, but I assure you that this essay is critical, scholarly, and detailed. It may be one of the best short (21 pages) essays on the subject.

Part 4: The Old Testament and Archaeology
The last section of Do Historical Matters Matter to Faith? is admittedly an area I am least familiar with. I have some books on biblical archaeology, but it’s most certainly my weakest area of knowledge. Maps make me dizzy and excavations sound boring unless mummies are involved and they are starring Brendan Fraser. Yet while I’ll quickly acknowledge this is not my area of expertise, I understand that it is huge for biblical studies… HUGE! There have been some extremely important archaeological finds that have substantially given support to the historicity of the Bible. This is often tied up with apologetics (the defense of the faith), but also impacts our understanding of Scripture too.

That being said, each of the four essays from this section were interesting, informative, and well written. I found John M. Monson’s “Enter Joshua: The “Mother of Current Debate” in Biblical Archaeology” quite fascinating to read because I simply was unaware of how controversial Joshua was. Monson’s essay does a great job of discussing the importance of understanding the genre and how that needs to be carefully understood in how we interact with the material and both internal and external evidence. The Joshua is an “Ancient Near Eastern Text” that must be understood in light of its literary contributions according to the ancient world’s “rules,” not our own.

Over all, Do Historical Matters Matter to Faith? provides top notch essays from well respected scholars that provide an excellent example of evangelical scholarship interact with critical issues related to the Bible. Do historical matters matter? Yes. Yes they do. And since they matter, this is a great book to utilize in the search for truth. Apologetic, irenic, comprehensive, and inviting… Do Historical Matters Matter to Faith? will get you started in your quest for a better understanding of why we can trust Scripture and why it is not unreasonable to remain “evangelical.”

Now, if we could finally settle just exactly what an “evangelical” is… ha ha!