by Luke Geraty | Mar 14, 2012 | Charismatic Theology, Pneumatology, The Vineyard Movement, Why I am "Charismatic" 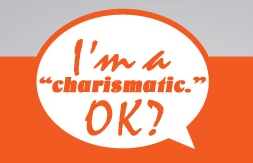 A few years ago I had developed a friendship with a man who I shared a great deal of respect for and similarity in theology. He and I both considered ourselves “Reformed” (Calvinistic), were convinced that the Bible teaches that baptism is by full immersion for professing believers, and completely convinced that Dispensational Premillennialism (i.e., Pretrib rapture) wasn’t a biblical concept. I know that’s a lot of terminology for some, but those issues were “hot button” items for us, so finding agreement was… interesting? Yeah, interesting.

After hanging out and discussing theological topics a number of times, the subject of the charismata (spiritual gifts) came up. I don’t remember how, but the issue was addressed. I found out that this person was vehemently opposed to any and all expressions of modern day spiritual gifts such as “prophecy,” “tongues,” or “healing” (we’ll discuss those buzz words later). He actually considered everyone who was “charismatic” not only wrong, but also anti-biblical, undermining the gospel, and possibly demonically inspired. It was also implied that “charismatics” had actually not studied Scripture enough and weren’t very intelligent.

For this post, I want to talk about labels. Why use the label “charismatic”? I think that’s a good question. Labels are often more a cause for division than is really helpful. And yet I can’t abandon using them because words have meaning! So why use a term that is sometimes associated with people like Benny Hinn, Peter Popoff, or the television network TBN? Well, as I stated before, lots of people use the term “Christian” who are far from representing orthodox Christian doctrine or the ethics found in the life and ministry of Jesus (e.g., Mormons and those who participate in the Crusades). If I changed the label I used every single time someone didn’t represent that label correctly, I wouldn’t be able to use any labels! I mean, I wouldn’t be able to be a Christian, an American, a pastor, and especially a “charismatic.”

So let’s talk labels. I actually have a love/hate relationship with the term “charismatic.” But before explaining that, I want to tell you the labels I am most assuredly not interested in using, as well as some explanation as to why:

“Pentecostal.”
I don’t use the term “Pentecostals” or a number of reasons. First, Pentecostals traditionally believe that the “Baptism in the Holy Spirit” occurs subsequent to salvation; I do not believe that. Secondly, Pentecostals traditionally believe that “speaking in tongues” is the initial physical evidence of that baptism; I do not. Those are the technical reasons why I don’t use that term. I simply am not Pentecostal, though I share with Pentecostals the belief that the spiritual gifts in question have not ceased and will continue until Christ returns. Yet there’s another concern that I have about that term. In the community that I live in, the term “Pentecostal” is used primarily to describe the United Pentecostal Church. This group takes some of the Pentecostal distinctions (subsequence and initial evidence) further than evangelical groups such as the A/G or Foursquare (baptism and speaking in tongues are part of “full salvation”) as well as denies the historic orthodox doctrine of the Trinity.

So if I use the term “Pentecostal” to describe myself, most people around where I live will assume that I (1) deny the Trinity, (2) believe people have to be water baptized by full immersion in the name of Jesus only to be “saved,” and also (3) speak in tongues to be “saved.” I don’t use that term, not as a slam on the A/G or other evangelical Pentecostal groups, but because I am both not a Pentecostal in the traditional sense and I am not interested in being connected with a local group that has some very questionable doctrine. So I’m not going to call myself “Pentecostal.” It’s too narrow for me.

“Spirit-filled.”
I have a simple reason for not using this term. It sounds sooooo arrogant. Every time someone around me uses it, what I subtly here is, “Everyone else isn’t Spirit-filled, but we are!” Perhaps that’s not the intention, but are people who do not believe that there is a subsequent Spirit-baptism or that certain spiritual-gifts are for today really not Spirit-filled? Really? I’m fairly certain that the Bible makes it quite clear that if a person isn’t filled with the Spirit, they aren’t Christians (cf. Rom. 8:9-11; 1 Cor. 12:3; Gal. 5:16-25, etc.).

I use the term “Spirit-filled” to describe all true believers in Christ. You can’t be a Christian without being filled with the Spirit. And that term is, while maybe not intentional, quite arrogant to use. If Methodists aren’t “Spirit-filled,” why would I dare call them a brother in Christ? We don’t even have the same Spirit indwelling us! So I reject it’s usage because I don’t believe it’s biblical, nor helpful. It’s essentially too narrow and, quite frankly, arrogant sounding… especially if you have dialogue outside of your little theological camp.

“Full Gospel.”
I used to hear this term and have a lot of agreement with what it was trying to communicate (I think). Paul talks about his preaching to the Thessalonians in a similar way when he says, “our gospel came to you not only in word, but also in power and in the Holy Spirit and with full conviction” (1 Thess. 1:5; cf. Rom. 15:18-20).

I believe that proclamation and demonstration are important aspects of the Great Commission. I draw this largely from the Gospel of Luke and Acts as well as in observing the ministries of Jesus and the apostles. And I strongly dislike minimalistic approaches to salvation (i.e., I don’t like the term “I got saved” because it doesn’t do justice to the “process of redemption” or the “walking with Christ” or the “growing in the grace and knowledge of Jesus” or of the “story of salvation.” Following Jesus is a way of life and not the crossing of a finished line. And I say all of those things as a convinced Protestant Calvinist who believes that Justification is based upon faith alone by God’s grace alone due to the work of Christ alone.I don’t like minimizing the work of the kingdom of God as being simply information transfer but I won’t deny that information transfer (proclamation) isn’t crucial.

But… Yes, there’s a “but” for this term. Most of my non-charismatic friends take this term to mean that “charismatics” don’t believe that non-charismatics are preaching the gospel. It’s like saying, “Hey, you guys aren’t telling people about Jesus! We are, because we’re “full gospel,” right?” Wrong. Very wrong. Very, very, very wrong.

So I agree that gospel proclamation and gospel demonstration are important. I want to push back against the idea or concept that the participating in “supernatural” work of the Holy Spirit is a waste of time and unimportant. But I also want to recognize that belief in the historic person Jesus Christ’s death, burial and resurrection isn’t sufficient (cf. 1 Cor. 15:3-8). So “full gospel” is just confusing and requires a lot of tip-toeing and explanation because it insinuates that other Christians aren’t teaching the “full gospel.”

“Continuationist.”
Technically, everyone who believes that the charismata continues until Jesus returns is a Continuationist. That’s pretty obvious, right? The spiritual gifts continue. When I’m talking to theologian types, I use this term because theologians know that this means that I believe there some people may legitimately “speak in tongues” or give a “prophecy.” It means that if someone says, “Hey, I’m sick,” I am going to respond by saying, “Hey, let’s pray and ask God to heal you.” Why? Because those supernatural gifts are still around, as God sovereignly wills (1 Cor. 12:11).

Those within the “Continuationist” camp might disagree upon whether Spirit-baptism occurs to all believers (my position) or is subsequent to conversion (Pentecostalism), but they agree on the main issue – the charismata. There are still disagreements and discussions over the continuation of modern-day apostles, how speaking in tongues w/ interpretation is best understood, to what extent “healing” is “guaranteed (if it even is), and the exact nature of the kingdom of God. But regardless of those disagreements, there is wide agreement on the overall main point – the spiritual gifts are still available and active and to be expressed in the life of the church until Jesus comes back.

So I really like the term “Continuationist.” It cuts to the heart o the matter. Unfortunately, the vast majority of people that I know simply don’t know what it means and I spend a lot of time explaining it and then having to explain what “Cessationist” (non-charismatic) means! Therefore, most of the time I just use this term amongst those who I know understand it, which isn’t very many.

When people hear the term “Charismatic,” they often think about a number of things, such as:

Those are just a few of the assumptions that people make about those who claim the title “Charismatic.” Since they are assumptions that I believe are based off of properly interpreting the relevant passages of Scripture, I’m comfortable with the term.

Plus… *and this is simply for the sake of full disclosure*… it’s kind of fun telling people that I am “charismatic.” Why? Because you can’t be a Calvinist and a Charismatic at the same time or the universe might implode! This is serious stuff!

And I say that I’m a “Charismatic” with the full assumption that all Christians are, in some shape or form, “charismatic.” After all, the apostle Paul says that serving and teaching and contributing and being generous and leading and being merciful can all be spiritual gifts (cf. Rom. 12:7-8). What Christian doesn’t believe that mercy is still a quality for today? What Christian would suggest that going “super mercifully” isn’t a quality that we’d like to see in our churches more often?

Call me essentially “Charismatic”… I’m okay with that; I’m not offended.