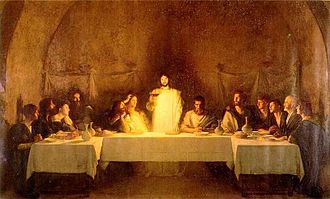 (2) Forgiveness of Sins – The author of Hebrews wrote, “without the shedding of blood there is no forgiveness of sins” (Heb. 9:22). Thus, the Lord’s Supper reminds believers that their sins are forgiven due to Christ’s sacrificial death on the cross.

“The renewal called for by the Lord’s Supper thus looks back to the past in remembrance, looks around in the present to the fellowship we experience with Christ and the body of believers, and looks ahead to the consummation, when Christ returns.” (John S. Hammett, Biblical Foundations for Baptist Churches, p. 283)

(4) Thanksgiving – While partaking of the Lord’s Supper, believers are to be thankful for Christ’s work on the cross. Furthermore, we are reminded that Christ Himself thanked the Father when He broke bread. Thus, the “Eucharist” (thanksgiving) reminds us of God’s grace.

(5) Eschatological Expectation and Anticipation – Isaiah indicated that there would one day be an eschatological banquet feast (Isaiah 25:6-8). When He instituted the sacrament of the Lord’s Supper, Jesus reminded His disciples of this idea by saying, “For I tell you I will not eat it until it is fulfilled in the kingdom of God… I tell you that from now on I will not drink of the fruit of the vine until the kingdom of God comes” (Luke 22:16, 18). Paul built on this theme when he wrote that “For as often as you eat this bread and drink the cup, you proclaim the Lord’s death until he comes” (1 Cor. 11:26). Finally, at the end of the age, we are told that believers will be encouraged to “rejoice and exult and give him the glory, for the marriage of the Lamb has come” (Rev. 19:7). When we fellowship at the Lord’s Table, we prophetically proclaim and experience a picture of what will one day occur when Jesus returns.