Yeah, It Sure Seems Like Jesus Said He’d Come Back After Things Get Worse!

“Immediately after the tribulation of those days the sun will be darkened, and the moon will not give its light, and the stars will fall from heaven, and the powers of the heavens will be shaken. Then will appear in heaven the sign of the Son of Man, and then all the tribes of the earth will mourn, and they will see the Son of Man coming on the clouds of heaven with power and great glory. And he will send out his angels with a loud trumpet call, and they will gather his elect from the four winds, from one end of heaven to the other.” (Matt. 24:29-31 ESV, emphasis mine) 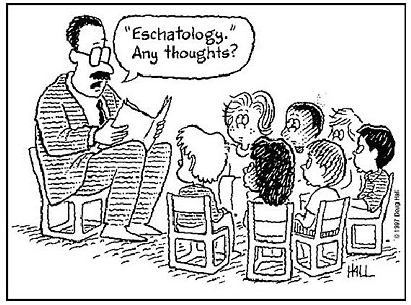 I don’t know how they do it. I don’t have a clue how they can possibly get around the clear meaning and implications of this passage. Jesus says, “immediately after the tribulation” the elect will be gathered. Dispensationalists tell us that the “elect” of this passage is Israel. Where, oh where, do we get that? Where else does the NT call Israel, apart from Christ, the “elect”? I simply haven’t found such to be true. Maybe I’m wrong.

But it sure seems like Jesus clearly told four of his disciples (cf. Mark 13:3) that he wasn’t coming back until things got really bad, not before that. How in the world does a doctrine that was absent for 1800 years of church history become such a standard view within much of American evangelicalism? Oh… yeah, we don’t like to suffer. That’s how 🙂

Men will never worship God with a sincere heart, or be roused to fear and obey Him with sufficient zeal, until they properly understand how much they are indebted to His mercy.