“Were people falling down?” or Revival happens when you see people losing control

Revival, as a subject, will produce a wide variety of opinions. Some Christians believe that the only thing that the world needs is revival. Others believe that revival is the same as revivalism and that Christians should avoid that which produces emotionalism. Still others suggest that since the word “revival” does not appear in the New Testament, it must be a negative practice to be avoided like the plague. Others find this previous opinion to be suspect of intellectualism and a complete avoidance of Old Testament revelation (cf. Ps. 69:32; 71:20; 85:6; Is. 57:15; Hosea 6:2; Habakkuk 3:2). There are also a great deal of Christians who believe that the popular concept of “revival” is rooted in both truth and error in that it isn’t that the Bible doesn’t teach revival but that many people misunderstand what revival looks like and produces and changes. There are other opinions, but to some degree, everyone falls into these categories.

I’ve been a Christian long enough to have experienced several types of “revivals.” I’d like to share some of these with you, but I’m doing so with the hopes of encouraging others to share what their concept of revival is and to have us wrestle with what the Bible says about revival and to explore whether some of the experiences we’ve each had are supported in the Scriptures. Are some of those practices healthy? If so, let’s seek after them! If not, let’s avoid them like the plague!

So in the next few days I want to present some ideas that people have regarding revival and give you a snap shot of not only some of the things I’ve seen and experienced, but what has been written and taught. Some of it is fictitious and some of it is real. Some of it I agree with and some of it I would consider to be bad… very, very bad. But you’ll hopefully catch the spirit in which I write…

“Were people falling down?” or Revival happens when you see people losing control
This is the type of revival is popular in what is generally referred to as the Pentecostal or Charismatic Movement. Not all Pentecostals and Charismatics agree with these things, but the generalization won’t be denied. In the mind of these types of Christians, revival is about experiencing the presence of God in a way that causes you to lose control of yourself. You may shake. You may fall. You may do things you’d never do, ever. Did I mention that you’d never do these things? I’ve seen people who were quiet and reserved turn into the loudest and most exuberant people in the midst of a worship gathering.

For instance, a man who would never stand up and shout out praises to God and would never dance during worship jumps up from his seat and screams at the top of his lungs how awesome God is while he begins to run around in circle, skipping and jumping. An older lady who has never done anything embarrassing that she knew of begins to speak in gibberish loudly and without reserve while experiencing electric sensations. A young man, aged seventeen, walks up to a person in a wheelchair that he’s never met or seen and asks, “Can I pray for you?”

These examples are just the beginning. Let’s go a little further. 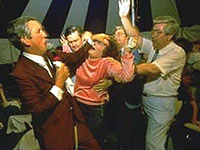 A preacher wraps up his sermon by offering an invitation to over 8,000 people to come forward, to the stage, to receive prayer. Thousands of people run to the front. Thousands. They are standing there, and it appears to be a wall of people. I bet you didn’t know that walls can collapse or fall, but they can. As soon as the preacher begins to put his hands on people or towards people, they start falling backwards, oblivious to what is behind them. Everyone, thousands of people, are all laying on the ground. No one appears to be bleeding from these falls, or even hurt. They are just laying there. Others say things like, “Praise God, for His presence is here!” and “The glory of God has descended!” Wow. I’m sitting there and I’m not quite sure what to think. What has happened? But the falling isn’t all. There’s more.

Other people are shaking. It appears uncontrollable. Not just a nervous twitch here and there, but the kind of shaking that would make the Quakers jealous. Oops, I should mention that these experiences within this type of revival isn’t exactly new. There’s evidence from past generations that these things happened then too. Anyway, the shaking is pretty intense. One person is shaking very, very hard. I’m worried that they might rattle their brain to the point of hemorrhage! I hear people describing this as “God’s doing something in that person” and “The Holy Spirit is doing a work in them.”

But it gets a little more intense than just the falling and shaking. I start to hear people laughing, and their laughing also appears uncontrollable. They are laughing louder, and louder, and louder. And it’s spreading! Oh my goodness. This is remarkable because some of these people looked pretty upset when they first got here. Some of them, if I’m honest, looked downright angry and depressed and frustrated! But now they are laughing. And the laughter is not stopping. It’s just getting louder and spreading to people sitting, standing, or laying near these people. I hear a pastor declare, “Oh the sweet and refreshing joy of the Lord!”

Now it’s really getting crazy! People are starting to bark like dogs! Others are frothing at the mouth! Someone just actually threw up! Another person, wearing lots of black, has eyes rolling into the back of their head. Some teenager, apparently quite upset, was starting to cuss loudly until a person, apparently a minister, laid hands on her and prayed for her that the peace of God would come. Now she’s laying there, crying.

Yeah, I could go on. Maybe you could add to this type of revival. What have you experienced or learned? I was told that this style format type dimension of revival is about God’s tangible presence. It’s about Him showing up. It’s about Him doing a work in His people. It’s about God changing people and doing things in them that you can’t explain or even, sometimes, understand. It’s messy because it’s about broken people coming into contact with an awesome and holy God that doesn’t car about the boxes you put Him in. And it’s about stuff that is weird! It’s about stuff that is novel and unheard of. But you’d better be expecting that kind of stuff, otherwise revival might not come! You need to expect the weird-supernatural-God-doesn’t-care-about-your-theology-or-doctrine type of stuff. Did I mention that God’s presence is the determining factor for this type of revival? Did I mention that there’s a difference between God’s omnipresence and His manifest presence? There is. And if you don’t understand that, then you probably won’t understand this type of revival.